tl;dr – me n33dz the codez => check here on the SenseHatGames folder

The Sense HAT is a small and inexpensive board  for Raspberry Pi. It sits on top of it and offers a variety of sensors and (most importantly), a 8×8 RGB LED matrix and a 5-direction joystick. More specifically, it offers access to these sensors 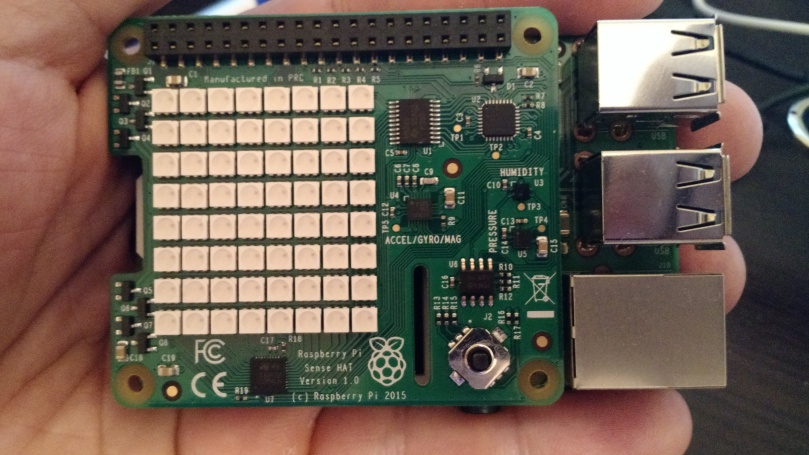 Sense HAT on top of a Raspberry Pi 2. You can clearly see the 8×8 RGB LED matrix whereas the joystick is on the bottom right of the HAT.

Absolutely worth mentioning, this board has also gone to space in the Astro Pi mission as part of a competition in the UK! I recently purchased one and, apart from the fun I had interacting with the sensors, I really liked the LED matrix and the joystick. So, I thought, why don’t I try and create a couple of games on it?

Since my Raspberry Pi 2 has Windows IoT Core installed, I opted to create a new Universal Windows Platform app. Then, I had to see whether a C# library for the Sense HAT exists. I was lucky and discovered that Mattias Larsson has created a great library to access the Sense HAT, you can see the details here. I then had to decide what games I should create. Well, this was the easy part, as both Snake and a Tetris-like game ideas were screaming into my head, “develop me, develop me”. So, I opened my laptop and started coding these two projects. It took most of my weekend but they both work flawlessly (I hope!), here’s a video of these two games in action:

Best part is that, since this app was developed as a UWP project, it can work on any Windows 10-enabled device, provided you write input (and maybe, layout) code for each platform. Here are two screenshots of the two games running on my laptop

We won’t check the source code since it is fully commented, but we’ll mention the important details.

If you haven’t heard about object pooling, you can check my blog post “Building a tower defense game in Unity” (check towards the bottom) where I explain and build a generic one. If you are the tl;dr type, an object pooler is an object that caches requested items and provides the user with a mechanism to request objects from this cache, instead of creating new ones all the time. This is especially useful in game development, since new instances of objects are needed all the time. Objects like “enemy”, “bullet”, “hitSound” are needed all the time, so its much more beneficial, performance and memory wise, to have them created beforehand and reused. Here is the part of the code that “gets” an item from our object pooler

Snake game creation was rather easy. The algorithm follows these steps
– start by moving the snake’s head left
– at any time, accept user’s input to move the head
– all the rest parts of the body follow the head (if you imagine the snake’s pieces belonging to an array, the i index piece will move to the i-1 index position)
– a fruit is popping once and then for the snake to eat (only 1 fruit can exist on the board)
– the snake can eat the fruit and have its tail grow by one item
– if the snake head gets out of bounds or tries to move into one of the pieces in its body, game is over

This is the class that handles the movement of the snake

This game was a bit more complicated than the snake one. You most probably know the game’s flow, so we will not explain it here. Instead, we’ll focus on some of the methods used.

The CanMovementBeMade method checks if a shape’s movement can be made, i.e. if the shape is moved it will not a) get out of bounds and b) not have any of its pieces overlap another piece. To do this, the method gets a clone of the shape, transforms it (i.e. moves it) and compares the new coordinates. The reason we get a clone and not modify the original one is that we haven’t implemented any “Undo” functionality in the Shape object (even though we could certainly do it).

The Move method a) checks if the movement can be made b)moves the shape by modifying row or column properties and raises the GameUpdated event to notify interested parties that game has been updated. If a bottom movement cannot be made, this means that the item has reached the lowest possible level, so we need to create another item.

The ShapeFactory class contains information about the 3 available shapes’ initial position (not depicted in the code part shown above) as well as the “rotation modifiers”, the values that are added to a shape pieces’ columns and rows in order to rotate.

That’s it! SenseHAT is an awesome piece of hardware and I’m looking forward to create more stuff with it. If you’re looking for the source code, check here on GitHub (SenseHatGames folder): https://github.com/dgkanatsios/Raspberry

Check out Thundernetes, a new open source project by Azure/XBOX about game server hosting in Kubernetes!